"Missing is a strange feeling. It doesn’t have to mean you are wishing to be in the place you are missing."—Linda Schenck translates Kerstin Ekman; Marilyn Hacker translates Jean-Paul de Dadelsen; Ander Monson on marginalia; Helen Oyeyemi goes blonde; Nigel Peake listens to the sounds of a city; plus new fiction by Colin Barrett, Eric Bennett, Jonathan Lee, Sara Majka, and Per Petterson; and poems by Kimberly Grey, F. T. Marinetti, Lynn Melnick, and others. 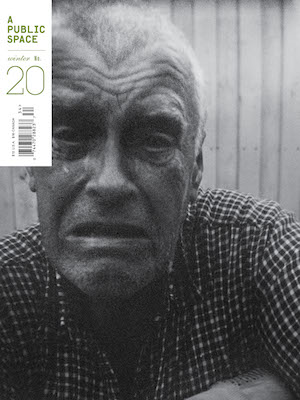 There were so many staring faces out there. Women are the worst, she thought. Why is that so? What did we do wrong? But she knew.

Translated from the Swedish by Linda Schenck

It seemed the kind of day when nothing serious could happen, the weather storybook pure. The kind of day when a man of Mason’s age might fall into an excitingly pointless affair, or combine a number of interesting ﬂavors of ice cream on a single delicate cone.

For my part I was always a little disturbed by him because I’d never heard him tell a lie. That was horrifying to me, like living in a house with every door and window wide open all day long.

The teachers thought him thick—and Bat was thick—but it was only when some of the other kids dubbed him Book Sniffer on account of how close he put his face to the page that he realized something was up.

A Man Without Shoes

No one in the kitchen really knew what “social aspirations” meant, it had to be a new expression, but Uncle Rolf had read a few books and thought he was damn clever.

Translated from the Norwegian by Don Bartlett

Exercise for the Evening

Stop. Instead of panting and gasping from second to second / Like a torrent hurtling from rock to rock with no special merit

Translated from the French by Marilyn Hacker

The ocean is a great thinker

There are a million griefs flying out there the president says

I’m scrubbing my face with a peach pit.

His latest project is a long poem comprised of several thousand similes without subjects. Like golf.

Summer Luncheon for Painters and Sculptors

After a long period of repose, a painter or sculptor who wishes to resume his creative activities at three on a summer afternoon will try in vain to excite inspiration with a traditional, succulent lunch.

Translated from the Italian by Elsbeth Pancrazi

Each Day I Get Up

I think I’m kind of Morrissey / don’t you

When she left he watched her walking in the thick air, her white blouse lit by the moon, like she was a spectral thing moving away from him. But what good is there in keeping the things you don’t want, simply because they are something?

The street has a certain length and the pavement a particular depth.

He says it destroys what it imitates by imitating it. Lonnie says a lot of things I don’t understand. But I know he wouldn’t want me riding in your car. I don’t ride in cars. Where’s your car?

There is something vaguely troubling to her about men: their energies never seem contiguous.