A portrait of Ernst Weiss by his friends, enemies, and critics, including Franz Kafka, Stefan Zweig and the author himself; Yiyun Li on time; Goli Taraghi in Tehran; Robert Sullivan on the invisible ecology of cities; Jorie Graham and Rosanna Warren translate Patrizia Cavalli; fiction by Tom Drury and Sandro Veronesi; poetry by Kimiko Hahn and Robert Fernandez; and introducing J. Scott Smith. 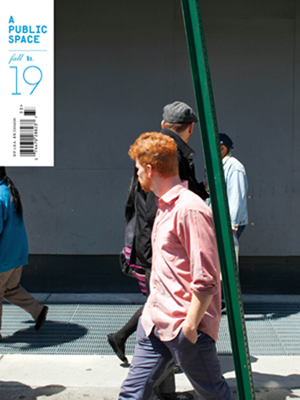 Amy wins a goldfish at the county fair.

Dear Friend, from My Life I Write to You in Your Life

My first encounter with before and after was in one of the fashion magazines my friends told me to subscribe to when I came to America.

A Phone Call from Heaven

He had lost his ticket, found it at the last minute, but then forgotten it at the hotel and had to turn around to pick it up, missing his plane by the time he made it back to the airport.

Translated from the Italian by Michael F. Moore

Up in the Gun

Slowly, his vernacular began to change.

I’ll Bury Your Body in a Shallow Pit of Sand

I don’t think about things as / deeply as you

Something that the object never can take in, / an empty bucket that won’t carry me.

Translated from the Italian by Rosanna Warren and Jorie Graham

The Department of the Interior

I’m not even sure I believe / in boundaries

Tongue Out (Beginning with a Line by the Painter Francis Bacon)

I like the dog; it looks / As if it’s just lying there

I heard the voice of reason / swerve bone-ward as it mouthed / the high hills of Art.

When we say we don’t recall or can’t explain, we don’t / mean to be evasive.

Between the Golem’s Teeth: A Portrait of Ernst Weiss

Not all writers feel fiction is the place to directly take stock of their social surroundings, no matter how out of hand things may be getting.

“In many instances, awareness of place is brief and unselfconscious, a ﬂeeting moment (a ﬂash of recognition, a trace of memory) that is swiftly replaced by awareness of something else.... But now and again, and sometimes without apparent cause, awareness is seized—arrested—and the place on which it settles becomes an object of spontaneous reflection and resonating sentiment.” —Keith Basso

Hannah and Addy were at it again, and as usual James was right in the middle.

What a blessing to be here, in the garden of my childhood.

Translated from the Farsi by the Author