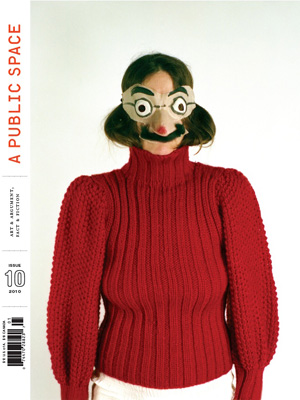 All Came to an End

In 1931, in the throes of the Great Depression, Grant Wood made a chronological list of thirteen prior economic depressions, beginning with 1819.

To the New Year

Comes upon and at me / does your gone-tinged promise.

Usually all we have to do when we go a-conquering is to build a boat, find a benefactress, recruit a ribald crew, and wear radiant glinting helmets.

I’m sure I’ll take you with pleasure!” the Queen said.

Whose Fault Is It?

Since the time of Descartes, Westerners have seen their core identity as a feature that stands apart from the physical world.

The Woman Who Lived in the House

He learned of Sergei’s arrest and imprisonment when a waiter switched the television to CNN.

There seemed to be a fellow feeling between the priest and bus driver, each too slight for his uniform.

My brother Walter is depressed.

Translated from the Spanish by Daniel Alarcón

My wife took me to Las Vegas to celebrate my fortieth birthday.

The Widow of Combarelles

Patty promised her old friend Coren she had the very best cure for heartache: the shrewd and pitiless French.

At night, alone in the greenhouse, Dr. Kreutzer listens to Bach.

Think Your Way Out of the Rain

I got to meet my heroes / and have dinner with them

In that part of the field / near the woodpile / had arisen an indistinct figure, / like a deeper blotch / in the evening darkness, / a seeming dog flying over the roofs.

Translated from the Italian by Martha Cooley and Antonio Romani

Parable of the Children

If it is better to be feared / than loved, best of all / pitied—obeyed not out of threat / but an understanding / the inability to harm / makes benevolence / a moot point.

When the previously withheld faces grew tough as flax / or softened into pliant pine in the umber wood, inclined / together, numerous, when the cobble crushed underfoot, / and pistachios cracked in their shells, grown heavy, / grown consummate among the nibs of leaves, then curious / seemed the stars, those nether eyes which scrutinized / each shape that stirred against the unlit trunks of trees.

Psalm Made of Silk

The psalm is a door / that tears me.

No more the lovely ease of it all, / and many years removed / from those languorous afternoons / where, together, they seemed / to create their own air

Wintering Beech / Tabernacle of green light green shade, summer space / of beechen green and shadows numberless, / that’s now but a bony show of itself, all its / ornaments and nest-hiding glad rags / wind-torn and let go where silence opens / its stony arms.

Each Gets So Shamefully Little

Each gets so shamefully little, only half a face, honed to a fine point, like swallow shadows dipping after mosquitoes

The turrets, self-conscious and vulgar, / the doors, so functional, / the tinted windows, lovely and perhaps unreasonable.

I am a forty-one-year-old woman living by myself, in the same one-bedroom flat where I have always lived, in a derelict building on the outskirts of Beijing that is threatened to be demolished by government-backed real estate developers.

Great books are never abandoners—they don’t betray us; they don’t turn away from our candid admiration or criticism; they don’t die.

Letter to the Editor

The “historic” novel is, for me, condemned even in cases of labour as delicate as yours, to a fatal cheapness, for the simple reason that the difficulty of the job is inordinate and that a mere escamotage, in the interest of ease, and of the abysmal public naiveté becomes inevitable.