Two Serious Ladies is the only novel by Jane Bowles, the marvelous and idiosyncratic mid-twentieth century writer also of stories and the play In the Summer House. The novel—a rare American existentialist fiction by a woman writer—tells the stories of Mrs. Copperfield and Miss Goering, two women seeking to live authentically and to find happiness. Compelled by Bowles's particular combination of humor and pathos, we follow their separate journeys as they stray ever further from home.

is the author of six works of fiction including the novels The Burning Girl (Norton) and The Emperor’s Children (Knopf); a collection of novellas, The Hunters (Harcourt); and, most recently, the autobiography in essays Kant’s Little Prussian Head and Other Reasons Why I Write (Norton). She has received numerous honors, including the Strauss Living Award from the American Academy of Arts and Letters. She teaches at Harvard University.

(1917–1973) was an American author of only eight published works: one novel, one play, and six short stories. "One of the finest writers of modern fiction in any language" (John Ashbery), she published Two Serious Ladies in 1943. Despite suffering a stroke in 1957, she continued to write through the end of her life. 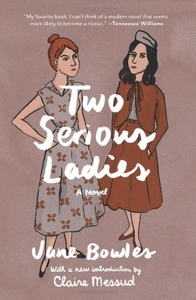 Jane Bowles wrote this novel during World War Two; Christina Goering’s name is no accident: ‘Christina’ for the woman who “wanted to be a religious leader when I was young”, and ‘Goering’ for the infamous Nazi aviator and Reichsmarschall.

Miss Goering is so paranoid about taking a taxi-cab (and getting into a car with a male stranger) that she’d rather go home with Arnold, also a male stranger. When I first read the novel, this logic made perfect sense to my 20 year old self.

Chapter 2, p. 37-62 (through “The other two women looked across the street and they all watched him disappear.”)

“You must admit…that the land is nicer than the sea,” says Mrs. Copperfield: “She herself had a great fear of drowning.”As does Miss Gamelon. Miss Goering has other terrors. Facing one’s greatest fears is a serious moral challenge that can look to others simply strange.

In Panama City, Mrs. C says to Mr. C, “I feel so lost and so far away and so frightened…” [p.64] Pacifica & Mrs. Quill are her nest in the Godless world. Suffering a sort of spiritual agoraphobia, she longs for the security of the Hotel de las Palmas.

Chapter 2, pp. 83-102 (from “When Mrs. Copperfield arrived in Mrs. Quill’s room" through “Mrs. Quill was dignified and remote and did not give her the lavish thanks which she had been expecting.”)

“The Lord has spared me more than he has Pacifica,” says Mrs. Quill. “She hasn’t been spared a single thing. Still, she’s not as nervous as I am.” Like Mrs. C, Mrs. Quill admires Pacifica’s toughness. In Bowles’ world, women’s happiness requires money, or men, or steely fortitude.

Finish Chapter 2, pp. 102-121 (from “Early the next morning Mrs. Copperfield and Pacifica were together in Pacifica’s bedroom" through “Listen, your pal’s been out of the room two whole minutes already. She’s gone to look for Pacifica.")

Pacifica takes Mrs. C swimming, and revives her recurring dream of safety in a mannequin’s arms. This elating baptism leaves her “trembling and exhausted as…after a love experience” [p.106]: braving her terror together is a form of great intimacy.

For Miss Gamelon, “reality was often more frightening…than her wildest dreams” (p.123) – a plight of those without imagination. Given that for many of us the inverse is true, it’s helpful to recall that there are those repeatedly astounded by what is.

Chapter 3, pp 142-158 (from “When she arrived at the tip of the island" through “something would happen to interfere with her departure.”)

Looking at the dark boardwalk, “Miss Goering, usually so timorous, was not frightened…She even felt…elation…common in certain unbalanced but sanguine persons… [who] approach the thing they fear.” (p.142) Bowles too did what frightened her most.

Andy, to whom Miss Goering will attach herself, explains straight away that “I have a habit of never paying attention to whoever I am talking to.” (p.159) His honesty perhaps surprises; but his way of being is eminently familiar is “his way of attributing qualities to her which were not in any way true to her nature” (p.160), which makes her feel “inconsequential.” What woman hasn’t had that “eerie” experience?

Chapter 3, pp. 176-196 (from “At about five thirty on the following afternoon" through “Then all three of them politely bade good-by to Andy’s back and left the room.”)

When Miss Goering returns to the mainland with Arnold and his father, Andy seems surprised to see her. Of course she came back, she says: “I told you I would.” (p.182). “That doesn’t mean a thing,” he replies; but Miss Goering’s word is her bond.

Chapter 3, pp. 196-210 (from “Arnold’s father had been sitting in the ice-cream parlor" through “He’s never going to listen to me,” Miss Goering said to herself.")

Miss Goering’s quest for self-realization has led all her hangers-on into ever-stranger circumstances. Arnold’s father, weary, renounces and wants only to go home. Arnold, though, remains charmingly importunate, which both saddens and pleases her.

When Mrs. Copperfield and Pacifica arrive at the restaurant to join Miss Goering, we see Frieda, for the first time, as she appears to an old friend – dismaying. “She was terribly thin and she appeared to be suffering from a skin eruption.” (p.215)